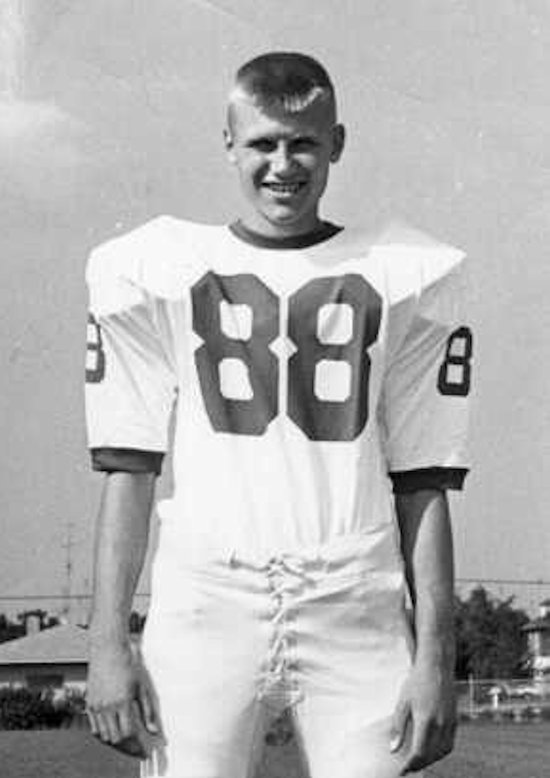 Clayton (Clayt) Edward Wilhite passed away  on April 6, 2021, following a lengthy, courageous battle against Parkinson’s disease, and with his sister by his side, Clayt passed away peacefully at his home in Ann Arbor, Michigan, on what would have been his wife’s 75th birthday. Clayt was preceded in death by his loving wife, Ann, who passed away on November 20, 2020. Clayt was born on August 9, 1945, to his loving, supportive and compassionate parents, Clayton and Ruth Wilhite.

He spent his childhood years in Lansing and in Bay City, Michigan. Clayt had a passionate interest in both academics and athletics. He was a consensus two-year All-State football star at Bay City Handy High School. He was named an All-American quarterback in 1962 with the additional accolade of being inducted into the National Honor Society.

Clayton was inducted into the Bay County Sports Hall of fame in 1988.

In 1963, Clayt committed to the University of Michigan and played a variety of positions under head coach Bump Elliott, lettering from 1964 through 1966. In his senior year, while paying tight end, he caught a 35 yard touchdown pass, helping to defeat The Ohio State Buckeyes. Most importantly, Clayt received the Maulbetsch, Robinson, Yost, and Phi Beta Kappa awards for academic and athletic achievements.

In 1969, Clayt met the love of his life, Ann Douglass, a fellow Wolverine. They married on June 27, 1970, in Woodbridge, Connecticut. Following their marriage, they began their odyssey in the world of advertising, assuming assignments throughout the years in Chicago and Sydney, Australia (Foote, Cone & Belding), London (Young and Rubicam), St. Louis (D’Arcy, Masius Benton & Bowles), and New York (Ammirati & Puris, McCann-Erickson and DMB&B/North America), before returning to Ann Arbor in 1997. Clayt served as managing partner and was on the board of directors for CFI World Wide, an international consulting firm, until his retirement in 2008. During this time, he also held board positions with Carrols Corporation, Burger King’s largest franchisee, and Pollo Tropical Corporation, a restaurant chain in the southern US and Latin America.

Clayt had a great interest in politics, and in 1976, took a leave of absence from advertising. He and Ann headed to Washington DC to assist a former Wolverine, President Gerald Ford, as an executive with in-house agencies on the reelection campaign. In 1992, he returned in the same position to assist in President George H. W. Bush’s campaign. Over the years, Clayt continued to utilize his adept managerial skills while serving on the board of the University Musical Society and was instrumental in establishing the UMS National Council Committee, thereby ensuring the financial stability of the organization while generating increased and enthusiastic support among the University of Michigan’s alumni and the international arts community.

Clayt is survived by brother Jim Wilhite (Ellen) of Shelburne, Vermont; sister Mary Post of Auburn, Michigan; brother-in-law Tom Douglass (Betsy) of St. Louis, Missouri; sister-in-law Elizabeth Bobro (Greg) of South Carolina; 11 nieces and nephews and 13 great nieces and nephews. Clayt was preceded in death by his wife, Ann, brother-in-law Michael Post, and sister-in-law Janet Douglass. The family wishes to thank special friend and caregiver, Violet Sabou, who gave unconditional love and care during Clayt’s and Ann’s illnesses. In addition, the family thanks the staff and caregivers at Brightstar for their support and kindness, as well as Nina Valean for the 16 years that she cared for their home.

A memorial reception for Clayt and Ann will be held from 10:00 a.m. – 12:00 noon on Saturday, May 8, at St. Paul’s Lutheran Church, 420 West Liberty in Ann Arbor, followed by a Christian service led by Pastor Donald Neuendorf. Clayt, Ann, and Janet Douglass will be intered at a private graveside service at Washtenong Memorial Park Cemetery. In lieu of flowers, consider making a contribution to the Michigan Athletics for Academic Success Program at Uof M, 1000 State Street, Ann Arbor, MI 48109 (attention: Melissa Montague); the University Musical Society, 881 North University Avenue, Ann Arbor, MI 48109; St. Paul Lutheran Church, 420 West Liberty, Ann Arbor, MI 48109; or to a charity of your choice in Clayt’s or Ann’s name. www.muehligannarbor.com