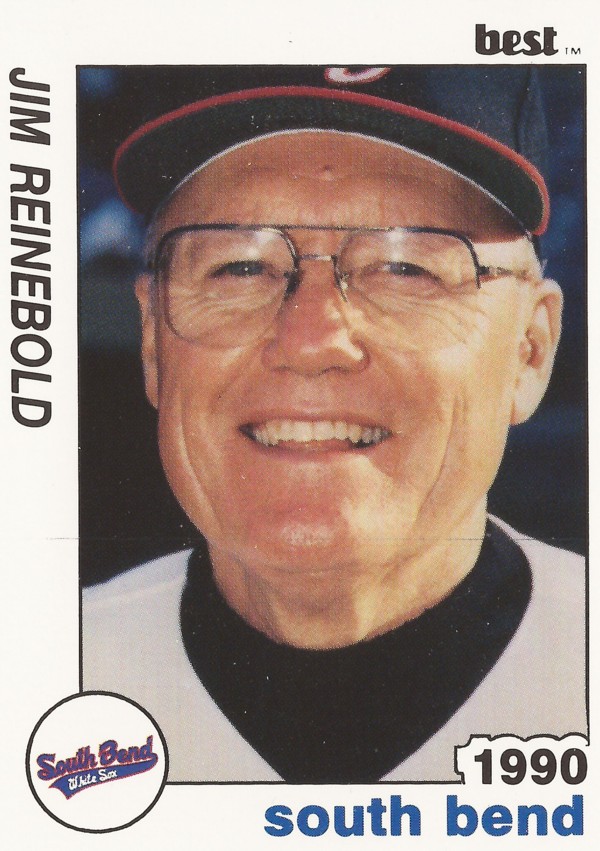 Coach was a lifetime resident of South Bend, born on January 3, 1930. Jim is survived by his wife of 61 years, the former Evelyn Shelburg. and five children: James Jr. (Cindy Amick), Jeffery, Jamie, Joel, and Jonathan (Julie Drosky). The Reinebold brood includes 11 grandchildren and 9 great-grandchildren. Jim went to high school at Woodrow Wilson where he ran track, and played basketball and football. “The Embryo,” his nickname due to his small stature, scored the first touch down in St. Joseph County School’s history. Jim also played the sport closest to his heart, baseball. After graduation, Jim received his bachelor’s degree from Mississippi College.

He entered the military during the Korean Conflict and proudly served on Eniwetok as a radio operator, witnessing the largest surface detonation of atomic weapons by the United States. After his military service, he began his long and storied career as an athletic coach. In total, Jim coached in 7 different decades, touching the lives of the hundreds of men and women he coached. Stops along his coaching tour included Greene Township High School (baseball and basketball) and T.L. Handy in Bay City, Michigan (basketball). During this time, he also earned his Master’s Degree from the University of Notre Dame. The longest and most successful period of his coaching career was his 25 years at Clay High School where he led the team to the 1970 All Classes State Championship in baseball. Jim’s dedication to teaching the game was the impetus to his record of 654 wins against 284 losses during his high school baseball coaching career. Always willing to help those who needed it, Coach successfully advocated for over 200 players from his team and his opponent’s teams in gaining admissions and the opportunity to play college baseball. Jim also coached professionally for 14 years.

He had stops as a field manager in Coos Bay for the Oakland Athletics, a pitching coach in the Cubs organization in Bradenton, Florida, and was an infield coach for South Bend’s very own White Sox and Silverhawks. Coach’s #4 is retired at Coveleski Stadium as well as at Clay High School. Coach is a member of the Indiana High School Baseball Coaches Association Hall of Fame, the National Coaches Hall of Fame and the South Bend Hall of Fame. Jim supported his community by successfully running for and serving on the St. Joseph County Council. Despite his professional life, Jim was always there for his children and beamed with pride for his grandsons and granddaughters. Coach will be missed for his leadership, his devotion to those willing to sacrifice to become better men and women, and his love of his family. Visitation will be at Welsheimer Family Funeral Home North, 17033 Cleveland Road, on Saturday, February 11th, from 12-2 with a service at 2:00 p.m., with Steve Bachman officiating. Private burial will follow at Sumption Prairie Cemetery, South Bend. In lieu of flowers, memorial contributions should be made to The Michael J. Fox Foundation for Parkinson’s Research, P.O. Box 5014, Hagerstown, MD, 21741-5014. Family and friends may leave e-mail condolences at www.welsheimer.com.