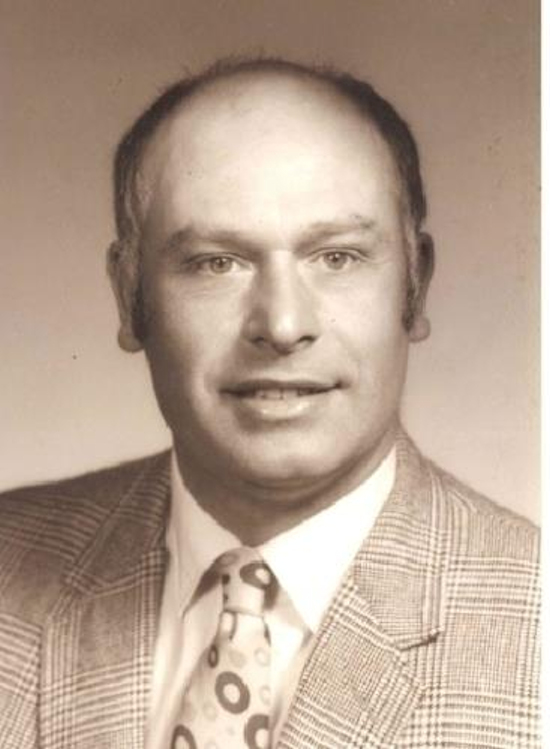 John W. Schmidt, Sr. “Bill” Kawkawlin, Michigan John William (J.Wm.) Schmidt Sr., commonly known to all as “Bill”, was born on May 8, 1932 in Lapeer, MI to John and Pearl (Coggins) Schmidt, where he only lived for six months before his parents returned home to the family farm in Kawkawlin. He passed away on Wednesday, January 17, 2018 at Sheffield Bay Assisted Living.

Surviving sister in laws are Betty Arsenault, Linda DeBats, Donna Meylan and brother in-law Allan (Trudy) Meylan. Two sons Donald and Randall are deceased as well as Bill’s parents John and Pearl and in laws, Herman and Marion (Grandmaison) Meylan and brother in laws Ronald Meylan, Pete Arsenault and Larry DeBats. Bill graduated from TL Handy High School in 1950, married his high school sweetheart and immediately started a family. Bill joined the family farm working with his father, John, and bachelor uncle, William. In his early farming years, Bill was also one to work through the winter months at various jobs including the Defoe Shipyard and automobile plants and today, the family farm still thrives and includes land in Bay and Arenac counties. Bill also kept himself busy serving in various organizations and at his church, Kawkawlin Community, where he attended his entire life, consistently serving as a trustee or other volunteer positions when needed. Besides serving on boards at his church Bill enjoyed many years with the Elks Lodge, often hosting memorable snowmobiling events at the old town hall in Kawkawlin on the corner of Mackinaw and River Roads.

Bill also enjoyed being part of the TL Handy Booster Club for many years as well as serving 16 years on the Bay City School Board of Education. He enjoyed serving as a Bay County Commissioner as well as a local baseball organizer and coach, helping to start the Tri Village Youth League, which still thrives today, and includes many more communities beyond the original Kawkawlin, Linwood and Beaver. Bill went on to coach Pony and Colt League baseball teams as well as many memorable slow pitch league and tournament championships in the 70s and 80s. The slow pitch leagues kept Kawkawlin Township’s Ball Park lights shining most summer nights and took them away to tournaments for many enjoyable MI summer weekends! Beyond volunteer efforts Bill enjoyed traveling throughout the country well into Alaska and Canada, annual trips to Florida and most recently a Florida home, snowmobiling (venturing out to national parks more than once), camping, canoeing, and enjoying their cottages in AuGres with family, friends, jet skis and boats. Bill also enjoyed skating on the Kawkawlin River flats at a very young age and continued to do so with his own children. Video footage of his abilities boasts a very talented young man on ice skates! These activities have ensured lasting memories in the hearts of many as we remember the Bill, Dad, Grandpa and friend that knew, during his active years, only one gear GO and GO HARD! Bill was an honest man and one that dealt with issues directly; no one ever needed to wonder how he felt about an issue when asked. We are forever appreciative for the guidance, honesty and work ethic that was the foundation of our family home. We extend our appreciation and gratitude to the entire staff at Sheffield Place where Bill spent the past many months. Your compassion and professionalism made Bill’s final days much more comfortable and many of you grew to feel very much a part of our family. We sincerely thank you!

Funeral Services will take place Saturday, January 20, 2018 at 11:00 a.m. at Kawkawlin Community Church. Officiating will be Pastor Aaron Knapp with interment in Heavenly Rest Cemetery. The family will be present at Gephart Funeral Home, Inc. on Friday from 1:00 p.m. to 9:00 p.m. to receive family and friends. Bill will be taken to the church on Saturday to lie in state from 10:00 a.m. until the time of services. Those planning an expression of sympathy may wish to consider donations to Kawkawlin Community Church or Wishes of the Family.