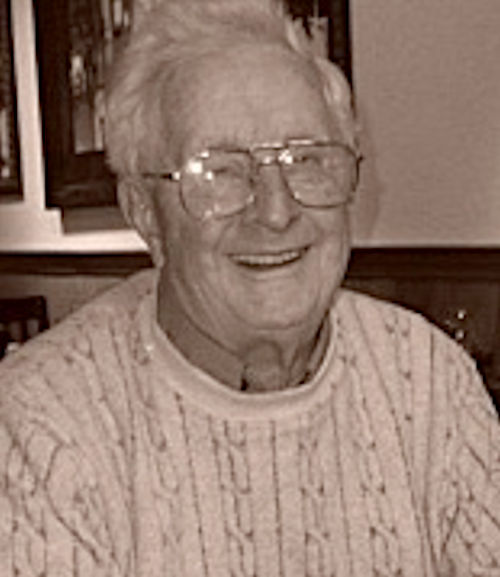 Robert “Bob” Buell White passed away January 19, 2017 at the age of 96. He leaves his wife of 68 years, Elaine Godfrey White, his son Charles and wife Jeanmarie McNiff of Brooklyn, NY, his daughter, Sheryl White and husband Mark Breibart of Boston, MA, and granddaughters, Becka Breibart-White and partner, Stephan Simons of Missoula, MT, Emma Breibart-White of Boston, MA, and his brother-in-law, David Godfrey and wife Donna Blair of Las Vegas, NV.

Bob White was born in Bay City, Michigan to Charles Herbert White and Lulu Buell White. From an early age, music was part of his life, his father started the first marching band in Michigan, and Bob played several instruments, was active in band and orchestra at Central High School, class of ’39. He attended Alma College focusing on music before enlisting in the navy in 1942, where he was accepted into the Navy band, and as a student at the U. S. Navy School of Music. He served on the U. S. S. Pennsylvania, seeing many campaigns in the Pacific, was sent to officers’ training school at Penn and Northwestern, became an LTJG, and served on the U. S. S. Honolulu before an honorable discharge. He continued his education in music at U of M, playing French horn in the Michigan Marching Band and earning his Bachelor of Music. In 1948, he married Elaine Godfrey of Lowell, MA, and with her, moved to Ann Arbor, where he completed a Masters of Music Education at U of M.

Bob and Elaine moved to Bay City where he was first the choral director at T. L. Handy High School and teacher of applied music in elementary grades. In 1954, he became band and orchestra director, and later, Supervisor of Music for Bay County, positions he held until his retirement in 1986. He also directed the marching band, Pep Band, coordinated and directed Handy’s annual Merry-Go-Round, and Mid-Winter Concerts, oversaw many award winning students at solo and ensemble contests, and with his band was invited to play for Presidents Nixon and Reagan receiving laudatory letters of commendation from both.

A lifelong tennis player, in the mid 1970s, Bob took on the coaching position for Handy’s tennis team, which won a number of awards. He was an active member of the Kiwanis, Elks, Bay City Dance Club, and president of Community Concerts until its final concert, when he arranged for remaining Community Concert funds to go to a music scholarship. He led the adult choir at the First Methodist Church for many years, having himself been in the Trinity Episcopal Church Boys’ Choir under his father. In a tribute to Bob and his father Charles, he was invited in 2010 to direct the Trinity choir and soloist in their presentation of his father’s hymn “Build thee More Stately Mansions.” He was also honored in 2010 and asked to direct the Western High School band at a Handy reunion, football halftime.

He loved traveling, and with Elaine, took many trips through the States and overseas, spent a decade of winters in Florida, over six decades deer hunting in his beloved north woods, loved big band music, musicals, his Tawas cottage, boating, Churchill, history, U of M football (Go Blue), crazy jokes, and first of all, his family, friends, and students.