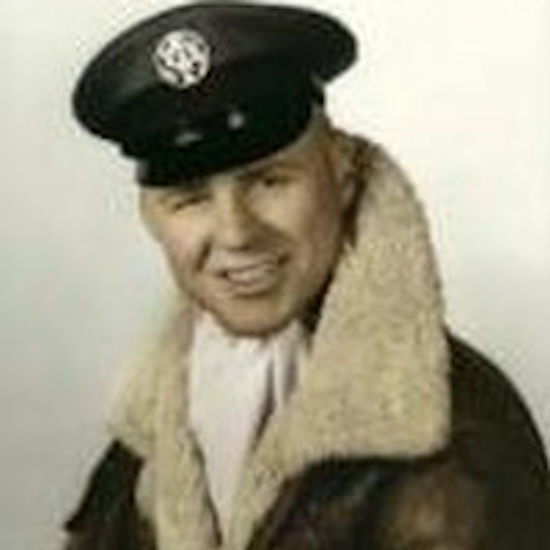 Browse other alumni from the class of:
N/A
Alumni Type(s)
Coach

Douglas W. Ruterbusch, Frankenmuth, MI, Formerly of Bay City, MI. Douglas William Ruterbusch, known simply as “Rudy” by thousands of students he taught and coached over two decades at Bay City Public Schools, has passed away. November 20, 2011 marked the end of a lengthy battle with heart disease and vascular dementia.

Doug was born on a farm in Wisner, Michigan, 8 June 1931. He was the 7th of 8 children. His face would light up whenever he spoke of those early years on the farm, remembering the hay wagons and farm animals; playing in the barn with his brothers, and watching his mother, Marian (Tenny), during those Great Depression years, can practically everything she grew in her garden. His father, Walt Sr., tired of farming and became a highly successful insurance salesman for Sun Life Assurance of Canada. By the late 1930’s, Walt was able to move his family to Bay City’s East Side, on the corner of Sixth and McLellan. This was moving back home for Walt. He had grown up on Columbus Avenue in the house his father had built in the 1880’s. About the same time, Walt was also able to buy a cottage on Ricoma Beach, where the family spent summers. Doug remembered summers on Ricoma Beach with his family as some of the best years of his life. Doug attended Central High School, where his father and older brother, Walt Jr., had both been honored as All State football players. Doug embraced his family’s, and his city’s, love of sports, by playing football, basketball, and baseball. He graduated from Central in 1949. He spent a year at the University of Miami, and another at Bay City Junior College, before enlisting in the United States Air Force. He served during the Korean War aboard the B-36 Bomber and the KC-97 Aerial Refueling Tanker. After the war, Doug used the G.I. Bill to attend MSU, earning a degree in science. On 22 December 1956, while still in school, Doug married Sharon Gansser, the granddaughter of Colonel Augustus H. Gansser. They were married in the First Presbyterian Church, where they both had been lifelong members, and Doug had sung in the choir. Doug’s first son, Christopher J., was born on their first wedding anniversary, 22 December 1957.

Upon graduation from MSU, Doug was hired by Dow Chemical as a Field Technician, testing explosives. As this job required a good deal of travel, Doug was anxious to find employment that allowed him more time with his young family. In 1960, he made the most important career decision of his life. Doug applied for a position at St. Charles High School, and was hired to teach physics, chemistry, and general science; and to coach track. He loved it. He had discovered his calling. He loved working with the kids. He loved being a teacher and coach. In 1961, he received his certification in Drivers Education at Ferris State College, and for the next three decades he instructed kids behind the wheel as well. On 12 February of that same year, his second son, Victor Lincoln, was born. Four years later, 3 March 1965, his third son, Kurt Robert, was born. After a short stint at Buena Vista High School, Doug was hired in 1966 to teach science at Handy High School. For Doug, this was a dream come true-the opportunity to do what he loved most, in the city he always thought of as home.

In 1968, Handy High School Principal, John Noell, offered Doug the position as head wrestling coach of the Handy Wildcats. This was an incredible opportunity for Doug, and he always felt blessed to be able to work with those wonderful young men. Doug insisted that in order to be the best, you had to wrestle the best. And within a couple of years, Bay City Handy was competing with, and defeating, the Flint, Lansing, and Detroit schools. Immediately following one of Handy’s heady victories over a top-ranked opponent, Doug had red shirts made up for his entire team, with white lettering that read: “Handy means wrestling!” And on the mat, every single match, those outstanding young men proved his motto. In fact, “Rudy’s Matmen” had only one dual loss in four straight seasons, spanning the years 1971-1975. The Wildcats were an especially formidable opponent at home, in the coliseum-like atmosphere of the Handy High School Gymnasium, with the fans stamping their feet and clapping their hands in unison, chanting: “Pin! Pin! Pin!”

In 1971, remembering how much he loved growing up on the Saginaw Bay, near the Tobico Marsh, Doug purchased a cottage on Linwood Beach. He taught his sons how to seine for minnows and fish off the docks. He loved driving the family speedboat with his sons waterskiing behind. Evenings, Doug was often on the back patio with a cup of coffee, watching the birds over the marsh.

Doug brought a tremendous amount of positive energy to everything he did, and, in 1974, with the opening of Bay City Western, Doug brought that enthusiasm for teaching and coaching to the newly opened school. He started the genetics program, teaching the kids about dominant and recessive traits, allowing them to conduct their own experiments with fruit flies. Doug was passionate about science and his enthusiasm made learning fun.

While at Bay City Handy, Doug had always enjoyed performing in the end-of-the-year program, Merry-Go-Round. He played a variety of characters, including one particularly memorable Tom Jones impression. He continued this with Western’s Celebration, emceeing the entire program one year in the role of Mark Twain. These programs provided Doug with another opportunity to work with the kids. He loved working with students in any capacity. His most ardent wish was that all of his students would strive for, and reach, their inner potential. He retired in 1995, after 35 years in the classroom.

Surviving are his wife, Sharon (Gansser); son Christopher and Julie (Durr) of Shelby Township, MI; son Victor and Robyne (Weir) and grand-daughters Hanna and Lyndsay of Hawaii; and son Kurt and Melissa (Hale) and grandson Karl, of Frankenmuth.
Cremation has taken place and there will be no public service. Arrangements have been entrusted to Cederberg Funeral Home of Frankenmuth, 590 N. Franklin Street. Please sign our guestbook or share an online condolence with the family at www.cederbergfh.com
Those planning an expression of sympathy may wish to consider memorials to the Defenders of Wildlife, 1130 17th St NW, Washington DC 20036-4604, www.defenders.org

To plant trees in memory, please visit our Sympathy Store.