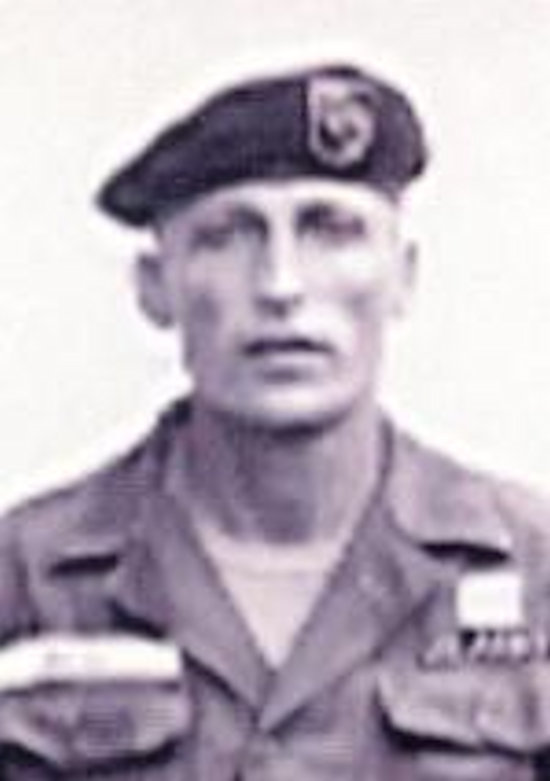 His career with the U.S. Army took him on two tours of duty to Korea, three tours in Vietnam, as well as a tour during an uprising in the Dominican Republic.

From tank commander with the 69th Armor Battalion, Company B, he moved on to a position with Company A as a Senior Parachutist with the 82nd Airborne Division at Fort Bragg. He later transferred to Special Forces as a Green Beret, and was one of the first Sergeants hand selected for the Army’s premier Delta Force.

With more that 600 jumps, including halo jumps, Frank qualified as a jumpmaster and master parachutist, teaching parachute techniques.

He was awarded the U.S. Army’s highest honor: The Bronze Star Medal.

Following his 20-year military career, Frank earned training as a veterinary technician, and assisted several veterinarians. This training aided a favored hobby, as he raised Tennessee Walking Horses for 25 years.

An avid hunter, with the help of his Belgian Malinois “Keeper,” no groundhog was safe when Frank was out!

Described as a true man of honor and honesty, Frank had an inner strength that whereby he could handle any situation, all in a manner of kindness and respect.

He was preceded in death by his parents, his treasured father-in-law and mother-in-law Dr. Robert and LeMoyne Pollock, and a sister Rosella Rose.

The family will receive friends Thursday, May 31, 2007 from 5-8 pm in the Lexington Avenue Snyder Funeral Home, where the funeral service will be held Friday at 11 am. Burial, with military honors, will follow in Ashland Cemetery.

Memorial contributions to Hospice of North Central Ohio or Christ Gospel Church may be made at the funeral home.

Online condolences may be made to the family by visiting: www.snyderfuneralhomes.com